A view of 405 Tattnall Street. 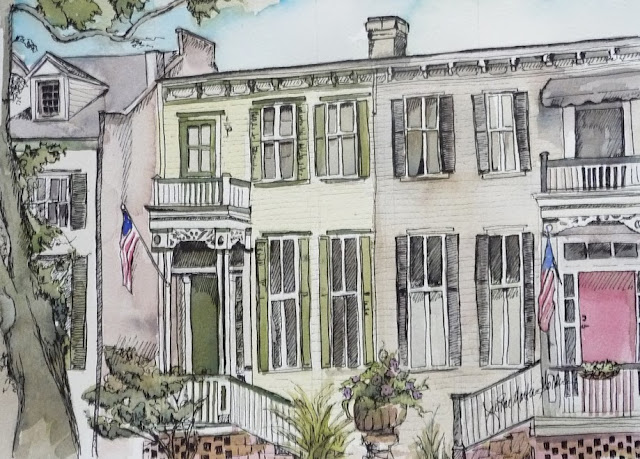 Carley's Retreat
This is the house we have been staying in while here in Savannah. 405 is a light yellow Italianate with green shutters. This really was just the perfect house for us. Not only does it have an incredible view of Jones Street out the front windows and is 40 feet from Crystal Beer Parlor, but it has some wonderful similarities to the house back in Rockton that Mark, my husband, is restoring.

This building was built in 1878 by Milton Homer Cooper, a civil war veteran who became a railroad engineer. He and his wife Jane lived in this house for the remainder of their lives. Their son remained in the home until 1920 when he moved further south.

The house has the same door knocker as our 1858 home in Rockton.
The stairway post is almost identical to our house and interestingly enough, broke in the same place. The layout is very similar to our house although this is a bit smaller. It was exciting to see the renovations the current owners made; modernizing the place while keeping the original flavor of the house.  The Ikea cabinets in this house are the same as Mark is currently installing.

We will miss this house as it was a truly memorable trip.
Posted by Jill Rae Finally Art at 7:28 AM