The summer is over. That went fast. Time to slow down and look back.

In Northern Wisconsin, there are two lakes dear to my heart. They are call The Twins Lakes. One is much bigger than the other, they don't have much in common except they are connected to each other. The place they join is a shallow ... sandbar possibly? I'm not sure how to describe it. Anyway, the land comes to a point where it meets the channel between the lakes. So, it's called "the point". I walk down to the point each summer with family or friends dragging a small boat to collect stones or driftwood found along the way.

I like to tell the history of the land we are passing; how Julius logged the area. He delivered the mail to the ends of docks using a  kayak. First he sold some land to the Well's who built the house we stay in today. But he was so unhappy at how mean Mrs. Wells was that he refused to sell anymore land to anyone. Loraine and George Doerfler went Up North for almost ten years getting to know Julius before he agreed to sell them some land. When he did, they built their own cabin. Loraine went up North well into her 90's and became one of my mother's best friends. She lived to 105. Her son and daughter in law live there today during the warmer months of the year.

Today's painting is from the other side of the point on South Twin. It's a charming boat house that's full of personality. 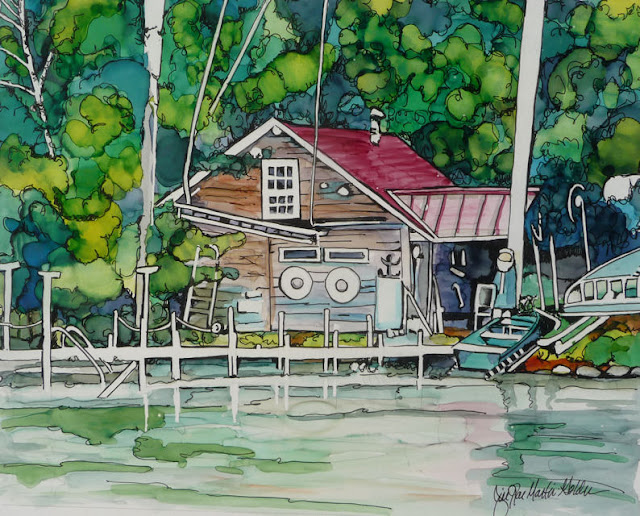